A new user survey for the PlayStation 4 has been sent to users and speculation begins on what some of the questions mean for the console.

The first part of this is not a rumor but boy has it started the internet a buzz with other rumors and speculation. I am talking about a recent user survey sent out to some PlayStation 4 users out there. That is not the rumor. Nor is it rumor that some of the questions asked allude to a PSN reputation system and the ability to alter or change you PSN ID. Here is a screen shot of said survey for you to see. 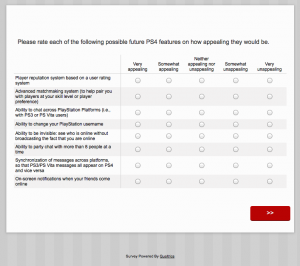 What this survey has done though is set the internet a buzz on if these will be features in an upcoming update or something that may be developed for PlayStation in the near future. Generally the rumors are surrounding the prior and this is just Sony ‘testing the waters’ before accidentally upsetting PlayStation 4, and PS3/PSVita, users by just releasing it. Personally I think it is just market research to see what the dev teams for the PlayStation OS and hardware should be focusing on.

Those are also only two of the suggested updates or changes at that. There is also mention of implementing an advance matchmaking system for online play, the ability to cross chat over all PlayStation hardware, and synchronization of messages across all platforms as well. That last one there is something I know I have desperately been wanting as I have to clear out messages on each system and I get excited when I see I have new messages on my PS4 when they are just the same ones I read on my Vita.

In the end, this is not much of a rumor but more speculation. At least if you look past the rumors started by gamers as to the when and how these new features would be implemented on all PlayStation devices. I for one am a fan of all of the features shown in the list and hope they do come to light here in the not too distant future.