For the third year running (pun intended) I was able to experience The Walking Dead Escape at SDCC. I broke down what it was all about before but I’ll give the quick version just in case you are lazy. In a nut shell it is a real world survival horror event that tests if you could escape from one end of a location, Petco Park in this case, to the other without being swarmed by the undead horde. The Walking Dead Escape of course using portions of the AMC show, comic books, and video games to theme everything. One could pay to watch the event, be a zombie in the event or run the course. In my case, I ran the course and here is my break down on the changes.

From the start it looked like The Walking Dead Escape was set up to be a lot like it had been before. Paid actors lead you into a “safe” location where you are supposed to be set up to be evacuated. As is always the case, some human is lazy and lets a few of the infected tackle and eat them, thus starting the run. Think of this like the gun firing at the beginning of a race. Then it is off to the course of running, jumping, tumbling, and climbing up things in the effort of not “becoming infected” and escaping the entire event.

What was odd this time around was that there seemed to be a lack of any real obstacles to overcome in the run. There were a few things to jump and run around but there used to be whole barricades to have to climb over that rose about 20 feet up. There were also rope bridges and ramps to run up and climb over. These were just not present in The Walking Dead Escape here at SDCC. If I had to guess this was due to complaints about the course being too difficult in year’s past or that Skybound wanted to make sure that everything was open to anyone no matter the physical limitations they may have. I’ll mean that to read “fatties allowed” as I’ve seen people with crutches have no issue in the past. Talk about a social commentary that was probably not meant.

Another thing that I found was lacking here was the force of keeping the people who were there as walkers “in character” the whole run. In the past years I heard talk that if you broke character, outside of the fun pics or PR pics, your ticket and time was over as it sullied the experience. The last two runs I had I only ever encountered any of the paid walkers “out of character” when asked to pose for pics or scenes to be used for media or in the event of medical emergencies and the like. You know, the stuff where it is expected that happen. This year I ran through a whole horde of paid walkers who were just Bull Shiting around in makeup. This broke the whole The Walking Dead Escape experience like it would if all of the zombies in Resident Evil chose to stand up and dance Thriller in the middle of the game. 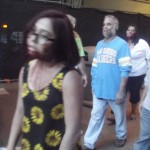 Again, all of the above where probably policy changes or relaxations in rules to make sure everyone who dropped cash had the most amount of fun but there should be some line. In fact, some of the walkers during the run who stayed 100% “in character” stated they had more fun than trying to just set up a cheap scare for any runners. That could just be the people we were able to talk to but that seemed to be the general consensus as the amateur actors were just doing their thing to make sure they got what they felt they paid for.

While the course did seem a bit easier and the walker participants a little more lax, if there was one place where the whole Walking Dead Escape experience thrived and sold it was in the hired actors for the event. Up until now it has always been just military and FEMA people around the course to guide you along and make sure we stayed hydrated. This year most of them were replaced with people and characters that felt lifted right from The Walking Dead universe. All of them were in character the whole time and even played along with us runners who were trying to make it an experience and not just another obstacle course run. They all had stories or were able to come up with something on the fly to cover why they were there to help with medical issues and hydration. 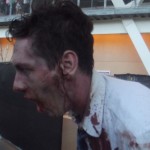 The last bit that I loved was the fact that no matter how well or poor you did during The Walking Dead Escape you still received the same ending to the course. That may sound a bit weird at first as I am not one for “everyone gets a trophy” but in the last two years it was a random toss up to the people at the end if you survived or died during your run. Even the year where they had gloves with black light paint on the walkers to indicate if you were infected or not it was still random if you were deemed “clean” or “infected” when you reached the end. The Walking Dead Escape had a full narrative that we were able to experience and that is more memorable than someone saying “Infected Line” or “Your Clear!” It also made The Walking Dead Escape feel that much more like a living video game experience as well.

Unlike in year’s past I was able to capture my own run of The Walking Dead Escape. I have included that video below. You can see quite a bit of what I am talking about in the above words throughout the whole video. Pardon the shaky camera and odd angles as I chose to film it as anyone would if the events that transpired just up and happened without any equipment; all via my cell phone. Have a good watch and keep an eye out for The Walking Dead Escape when it comes to your town. It is completely worth the price of admission. You just have to hope that the rest of the people who live in your area are up to playing a real zombie and not just phoning it is like some of the SDCC crowd seemed to do.