In a new trailer today Ubisoft showed off how masterful Arno is in Assassin’s Creed Unity as well as a new Templar, Elise

If you are a fan of CGI trailers then we have a new one here for Assassin’s Creed Unity with a bit of added in for all of you Ubicollectors out there. It depicts the main protagonist, Arno, racing through Paris and against time to save someone from the horrors of beheading. That someone also happens to be another central character to the overall story of Assassin’s Creed Unity; Elise: The Fiery Templar.

From the sounds of the novel description it looks like we will be getting a look at the story of Assassin’s Creed Unity from Elise’s perspective of things… a Templar perspective… a lover of an assassin’s perspective… I’m guessing it will be a lot like those DLC bits in games where you get to play out what caused certain scenes to play out as they did. Only in this case you will have to buy a novel and read the scenes out.

Also, as I mentioned above, you Ubicollectors do have another bit here for Assassin’s Creed Unity due to this novel as it comes with an awesome statue of Elise. Not only that, but the statue that comes with the novel can also be linked up to the Arno one from the collector’s edition of Assassin’s Creed Unity to create an awesome diorama. That and a few little DLC bonuses to give you some in game incentives as well. All the things a collector would want, no?

Assassin’s Creed Unity is still slated for an October 28th release on out PS4s, XB1s, and PCs and we can start diving into the novel sometime in November. Don’t want to spoil the story or anything. Don’t worry though, you can purchase that Elise: The Fiery Templar figure on October 14th so you have something from Assassin’s Creed Unity to look at until the game launches. Hooray for that? 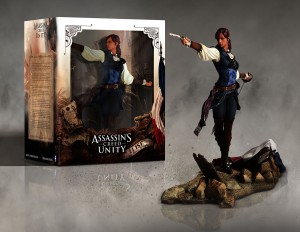