Sony unveiled their VR head set, dubbed Project Morpheus, at GDC this week. Will we all be playing God Of War as Kratos now?

Some big news has emerged from Sony at GDC in the form of Project Morpheus. This is the company’s new virtual reality headset that has been designed to work hand in hand with the PlayStation 4. If it will let you play any title that has made it to the next gen console from Sony is still up in the air but Project Morpheus makes it an option. Not only have an option for any old title, hopefully, but for developers to make some amazing experiences on the PS4 moving forward. Exciting times indeed.

So what do we know so far for Project Morpheus? Clearly not as much as we would all hope for at this time although those who are attending GDC 2014 will be getting hands on so expect the news to flow soon. What we can tell is thus.

That is about all we know except for how sleek the design looks when compared to other units that are out there in the dev world right now. I am insanely interested in seeing how this will pan out as I have also heard that people have been able to play my favorite God Of War title on the show floor demo. You have no idea how much I would love to replay that again in VR with Project Morpheus. Let’s get past this prototype phase and move into something ready for home already people. I needs to give it a try. 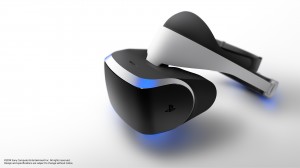