A new fact sheet for Dishonored II has surfaced describing a bit more as well as a 2016 release window.

It’s only been a few days since we first saw the possible ‘leak’ of Dishonored II and now we have some follow up ‘leakage’. As Bethesda doesn’t respond to rumors and speculation none of this can be confirmed at all as of yet but we have another item to lead to the announcement of Dishonored II. This time it is in the form of a fact sheet of sorts that shows off a few features that we might be able to look forward to.

What exactly is on this fact sheet? Well it looks like Dishonored II, if it is to believed, will be using the ID Tech 5 engine, have some multiplayer aspects, a new leading role, and be out sometime in 2016. That is quite a ways down the line to be possibly getting a full announcement at E3 here in a few months. Not to mention that it is also listing a similar pre-order bonus as Wolfenstein: The New Order. That is access to the Doom beta. Interesting but here is where my bullshit alarm goes off.

Pre-order a game that isn’t coming out until 2016 and get access to the Doom beta. The New Order lands here just before the purposed Dishonored II announcement at E3 and the beta for Doom is one of the pre-order bonuses. So either the Doom beta is landing sometime in 2016 and the pre-order bonus for Wolfenstein is kind of bunk, who’s going to remember that far along, or Bethesda is going to try and get pre-orders for Dishonored II years in advance when they would have very little to show off. Speculation, but it doesn’t sit well with me.

What do you think? Do you really think that Dishonored II is coming as has been rumored or is this all some hoax for now? I have no doubts that Dishonored II will come sooner or later but I can’t believe the tidbits all too much as of now. We’ll see here in a few months hopefully. 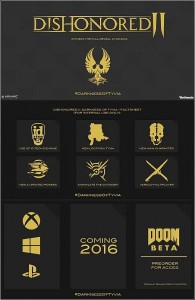