From the creators of Left 4 Dead comes an exciting new first and third-person shooter; Evolve. One might ask: how can a game be both? Well in first-person mode three other players and you team up to take down a monster, while the other person controls the monster from a third-person perspective. Some of these monsters look absolutely terrifying. My favorite monster so far is a 30 foot tall snarling beast with spikes.

As one of the Hunters in Evolve you get to choose one of four class types; Assault, Medic, Trapper, and Support. All provide different skills all working together allowing you to accomplish your hunt. You can level up your classes as a human, although being a monster is where you truly feel a sense of evolution; running from the hunters and eating until you evolve into something bigger and badder than before. 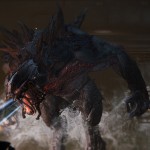 The Assault class is a pretty self-explanatory class. While playing as this class it is your job to dish out the brunt of the punishment to the beast your team is hunting. The Medic is there to help keep everyone alive but they can also help disable the monster. The Trapper is also another somewhat self-explanatory class. Your main goal while playing as the Trapper is to immobilize the creature. Lastly is the Support. The Support has a variety of offense and defense to work with making him a well-rounded class. 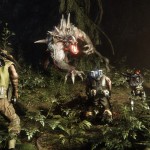 Evolve – From The Darkness

The only concern I have is that I haven’t seen anything about offline play for Evolve. I know the strong selling point of the game right now is a totally new and competitive multiplayer experience. The world of Evolve just looks so interesting and even with Left 4 Dead we got some sort of story with it. Granted it was a simple story but that is all you need in a zombie game. The weapons also look very interesting; the futuristic feel of them really sets them apart from other shooters on the market. I am also looking forward to seeing what, if any, kind of different monsters we get to face off against in Evolve. I know the hulking behemoth is what Turtle Rock Studios are showing off right now but one has to wonder what kind of tricks they have up their sleeve.