A new marketing campaign for Watch_Dogs has hit Facebook to show you how much can be gleaned from your account.

Just in case you need something to tide you over until Watch_Dogs releases on May 27th, Ubisoft has just turned on its latest marketing fun for us all via a Facebook ‘app’. In this case it is a Facebook app called Digital Shadow that is made to look like you are being tracked via your presence on Facebook. Granted this is something that can be done fairly easily due to the fact that most people forget that everything they do online in the real world can become public in the real world, but that is just social commentary mumbo jumbo I’ll put aside for now.

I personally gave it a whirl and was glad to see that if this were for real no one would truly be able to track me down based on the information I let lose into the virtual world. At least if I were to go based on the limitations of this Watch_Dogs app. 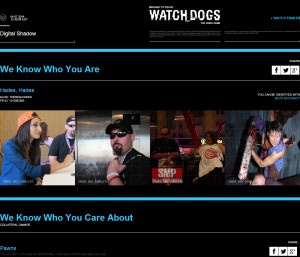 It did a decent job of capturing my mortal coil’s likeness in the images but apparently those that I have held near and dear to myself for quite some time are my biggest enemies. Not only that but I apparently would have no problem sacrificing others who I hold close to me black heart just to save myself. Also, according to all of my “Digital Shadow,” I live thousands of miles away from my actual home because I went to a convention once or twice. I sure hope the hacking and cyber stalking in Watch_Dogs is better than this.

Granted, my complaining would make it seem that I was hoping that Ubisoft’s little Watch_Dogs app could truly cyber stalk me, but I don’t. It is a fun little bit to play with though. Maybe also show you how much you all place out there in the world for anyone to easily look up and use. Either way, have fun with it as that is what will get us through until Watch_Dogs launches soon.

Here’s the link again for those who didn’t catch it above. digitalshadow.com