Metro Redux was a rumor that cropped up recently but has since been confirmed by Deep Silver.

It is seeming like developers and publishers are having issues keeping their titles in work under wraps as of late as we have yet another ‘leak’ that has been confirmed; this time for Metro Redux. What is Metro Redux? If the images provided below are anything to explain it is a new edition of the Metro franchise from 4A Games and Deep Silver. Here’s what can be gleaned from these ‘leaked’ images.

These images show that Metro Redux would be an upgraded version of Metro 2033 and Metro: Last Light for the next-gen consoles as well as PC. All of that plus all of the DLC that has been released all on the PS4, Xbox One, and PC. Here, take a gander at the images here. 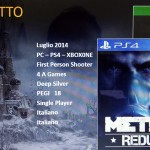 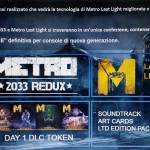 Now for the interesting part that may be part PR cover and also PR announcement. Shortly after these images have hit the web and sent people into talking about how cool it would be to get a next-gen upgrade for these titles, Deep Silver has taken to the Metro Community website to clarify. Here’s a bit and why I love Deep Silver’s PR team.

They also go to explain that these images are from an old ‘internal planning presentation’ so we shouldn’t expect what we saw to be the end all and be all for a Metro Redux. In fact we are all supposed to hold on and see what is really going on at this year’s E3 in June. Unless Metro Redux is actually a brand new title for the franchise I am not too sure what else could be announced for the game/bundle. This could just be the usual PR hustle and bustle to cover up for the ‘leak’ or it could be sincere. Given my dealings with Deep Silver in the past I am going to think the latter.

I for one would be happy with just what was gleaned in the above images as I loved both titles and would love to have a reason to play them again. I also would love to see what 4A Games can do with the power of the PS4 and Xbox One. The PC as well although most PC enthusiast will already say that the graphics for the PC version were the best for the games. To that I would still say that when developing for multiple platforms you can’t always go balls to the wall given the limitations of the weakest system.

Now I have yet another amazing title to wait for this coming E3 and will speculate in my head what else could be coming for Metro Redux.