The Last Of Us

Last week we heard a rumor that The Last Of Us was going to be making a jump into the next-gen with a port to the PS4. None of that has been confirmed to date. Now we are seeing a little more to the rumor or at least a website’s way of scamming gamers out of some cold hard cash for the amazing game. About $90 of that cold hard cash if everything is to be believed.

While the link to the original listing of The Last Of Us Complete Edition has been removed from the Spanish website XtraLife.es below is an image of the pre-order page for this edition of my GOTY. Not only the game but a nice little satchel for The Last Of Us as well. Here, take a look. 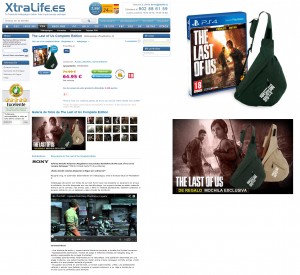 The Last Of Us – Complete Edition

Kind of interesting and another tick in the ‘could be true’ category for The Last Of Us coming to the PS4. Granted, as I said Sony and Naughty Dog have yet to come out and announce anything so this still could be just a rumor with some people taking advantage of the ‘want’ for this. I personally was hoping that they would have already taken a page from Deep Silver/4A Games and just announce it or deny it but that has yet to happen. Hopefully it will soon because I don’t need my heartstrings tugged anymore for The Last Of Us. The game did a good enough job already.

Keep an eye out as we will update as information comes along but this is still a rumor with just internet speculation surrounding it. You should never take that without a grain of salt as you should hopefully know. We’ll see…