Just as last year, The Walking Dead Escape was back with a vengeance at Petco Park during the San Diego Comic Con. For the uninitiated this is an event where a good portion of the sports arena in San Diego was converted into an obstacle course in the theme of AMC’s The Walking Dead. It really allows for people to really test their mettle and some of their survival skills to brag that they could survive the initial zombie outbreak. 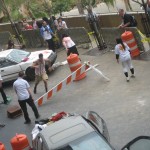 I was lucky enough to get to run the course again this year and what I found interesting was that most people I ran with compared the experience to most of the action zombie video games on the market today. Granted we were not allowed to attack the zombies in the run, but I would have to agree with the sentiment as there has been a push in the industry with Outlast and Dying Light this year. Those titles focus more on the non-combat of survival just as this run did. This is not what the run was really about, but until we get to a world of holograms this is really the closest we can get to being “in the game.”

Anyways, let’s move into a few of the core items of the event followed by a nice run through of the course. 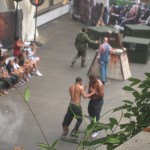 What is funny here is that just like the show, comic, and video games the real threat is the other humans in the area. While the main goal is not to be touched by the zombies, it really become not being “used” by the other humans. I found myself having more issues with not getting trampled or thrown to the infected while running than actually dodging the zombies or obstacles in the run. Like I was some NPC AI that was there just to be used to continue on. I’d be lying if I didn’t do the same thing, but it was interesting to see as this was just something fun and not real survival. 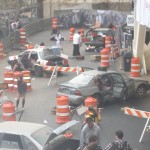 Now this wouldn’t really be a fan service event if it didn’t snag some key elements from the show itself; am I right? While there were some rather large elements, like the gladiator pit from Woodbury, but it was also very subtle things that were included that added to the immersion most people didn’t consciously catch, just like the little things in video games that go unnoticed until someone points it out online. For instance there were multiple occasions where “Clear” was on the walls or obstacles in the course or the background video on all of the monitors in the park showing Comic Con itself being flooded with zombies. These really helped move us all into the mentality even though you could still look out over a non-infected San Diego. 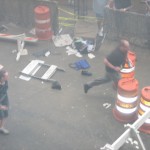 I’ll be honest; I could go on for days about The Walking Dead Escape as it really feels like it marries all the interactive elements of the franchise into one event. I’ll let the below video sell you more on the whole thing. It really is worth the price of admission and it may be coming to a city near you so you don’t have to wait for SDCC to give it a try.

The following video is not me but of someone who was on the run before me. While the obstacles never changed, the zombies were allowed to roam leading to a bit of a change.