So what can we expect from this new experience? Well it sounds like there will be rolling, running, vaulting, jumping, and finishing things off with an awesome 25-foot “Leap Of Faith” in the style of the Assassin’s Creed franchise. It sounds to be a bit more difficult than that though as it is listed that anyone who can complete the course will get an exclusive Assassin’s Creed Experience t-shirt to show off you were able to stand among the greats like Arno and Altaïr. Here’s a look at said shit as well as the others you can get for pre-ordering Ubisoft games at SDCC. 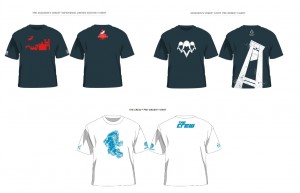 The Assassin’s Creed Experience kicks off at 10am PST on the Thursday for San Diego Comic Con (7/24) and runs through the whole convention. Hours being 10am to 6pm Thursday to Saturday and 10am to 5pm on the Sunday. There is no badge needed to participate in the event so even if you can’t get into the Ubisoft panels you can at least run your ass off. So, feel free to head down to the MLK Jr. Promenade at Harbor Drive and put your money where your mouth is all you “free runners.”

This now make a total of three real world video game like experiences at SDCC. The Assassin’s Creed Experience, The Walking Dead Escape, and Nerdist’s Borderlands Laser Tag Experience. I personally love these ideas and look forward to more real world versions of my video games. Now Santa Monica Studios just needs to announce God Of War 4 and get something like this set up for SDCC every year and I’ll be in gamer Elysia at least once a year. Just please don’t steal my idea there…